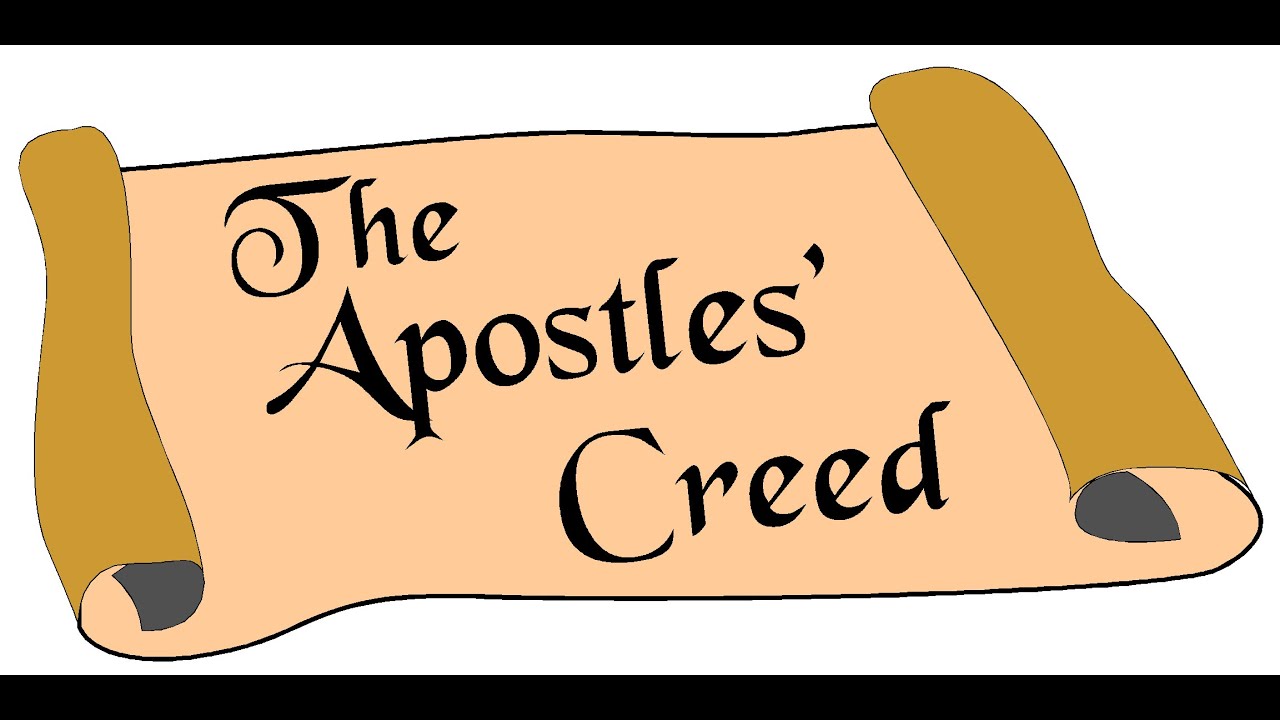 This is what the Apostle’s Creed states:

I believe in God, the Father almighty,
creator of heaven and earth.

I believe in Jesus Christ, his only Son, our Lord,
who was conceived by the Holy Spirit
and born of the virgin Mary.
He suffered under Pontius Pilate,
was crucified, died, and was buried;
he descended to hell.
The third day he rose again from the dead.
He ascended to heaven
and is seated at the right hand of God the Father almighty.
From there he will come to judge the living and the dead.

I believe in the Holy Spirit,
the holy catholic* church,
the communion of saints,
the forgiveness of sins,
the resurrection of the body,
and the life everlasting. Amen.

Here is some commentary from Billy Graham and others:

“In its oldest form, the Apostles’ Creed goes back to at least 140 A.D. Many of the early church leaders summed up their beliefs as they had an opportunity to stand for their faith—see, for example, 1 Timothy 6:12. These statements developed into a more standard form to express one’s confession of faith at the time of baptism. It is not Scripture, but it is a simple list of the great doctrines of the faith.

The word “catholic” means “relating to the church universal” and was the word used in the original version of the Creed. It does not mean the Roman Catholic Church, but the church, the body of Christ, as a universal fellowship. The phrase, “He descended into hell,” was not part of the creed in its earliest form.”

The Apostles’ Creed is a good summary of Christian doctrine. However, there are two primary concerns with the Apostles’ Creed. First, in regards to the phrase “He descended into hell” – please see our article on “Did Jesus go to hell between His death and resurrection?” Second, in regards to “the holy catholic church,” this does not refer to the Roman Catholic Church as we know it today. The word catholic means “universal.” The true “catholic” church is all those who have placed their faith in Jesus Christ for salvation. Please see our article on the universal church.”

“How the Church Got the Apostles’ Creed

Tradition says that Jesus’ twelve apostles formed the Creed in the early days of the Church.3While scholars doubt the veracity of this story, the need for a concise set of Christian beliefs may indeed go back that far.4

Paul, the first Christian missionary and the author of many of the books in the New Testament, mentions in a letter to one of the first churches that what he “passed on” to them in his teachings and writings was what had been passed to him.5 He then outlines the foundation of Christian belief, what he says is of “first importance”: “that Christ died for our sins according to the Scriptures, that he was buried, that he was raised on the third day according to the Scriptures.”6

Early church leaders living in the first generation after the apostles also made concise statements of faith. Ideas and terminology used by writers such as Ignatius (writing around approximately 105 CE) and Irenaus (180 CE) correspond to what eventually became the Apostles’ Creed. Tertullian (197 CE) even called it “the rule of faith.”7 A letter written by a council of churches in Milan to an early church leader named Syricius refers to such a creed by name.8 Most closely related is the “Old Roman Creed.” This was series of questions asked of individuals who wished to be baptized. It likely dates back to 200 CE and uses language similar to that of the Apostles’ Creed.9

The first verifiable statement of the modern text of the Apostles’ Creed can be dated back to the notes of a monk named Priminius in 753. Around the same time, Charlemagne used the Creed to unify the teachings in churches across his empire.10

Not everyone embraces the Apostles’ Creed. Some churches have argued against it or ignored it. Some believe that it is missing key elements of the Christian faith. Others are not willing to embrace any documents that claim to be formative outside of the Bible.

Over the centuries, churches have continued to write new statements of faith. These use updated language, respond to new questions, and provide additional details. However, the Apostles’ Creed remains valuable as it is often used as the basis for such documents.…

For Christ-followers, the Creed provides both comfort and challenge. It is encouraging to see oneself as another believer in a centuries-long line of men and women who affirmed the same tenets. But the Creed also challenges believers to ask themselves whether or not they are living lives consistent with what they are saying.

For those who are exploring God, the Creed acts as a guide to what Christians believe. The Creed does not replace the Bible, being a part of a local community of Christ-followers, or living by the power of the Holy Spirit, but it is a helpful and well-worn tool for beginning this journey.”