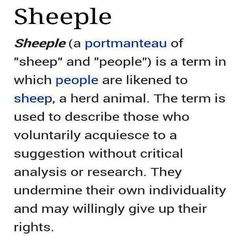 Disclaimer: All credit goes to their rightful owners.

Why We Unknowingly Compromise Ourselves Under Social Pressure
Posted Nov 10, 2015

Anyone who has been a victim of the herd mentality– whether for being a black sheep or going along with the herd– will want to know why people become sheeple1— how the peer pressure process works, whether on the playground, in the locker room, in the boardroom, or on the battlefield.

The need to belong is a basic human need, but it goes awry when joining the crowd means betraying the call of our heart or who we are.   Have you ever wondered why people can be happy making others unhappy?  A reputable company is caught for allowing corporate abuses. A soldier cheers at the destruction of the enemy. A group of popular kids bully a classmate for wearing a big backpack. The list goes on and on…

Or, have you ever wondered how your old friends could change so dramatically after moving away or changing jobs? Once Betty was a Republican and now she’s a Democrat. Once Sue was kind and sweet and now she is cold and heartless.  Once Joe wore reggae t-shirts and had dreadlocks, and now he wears heavy metal t-shirts and has a mohawk.  Once Harry was confident in himself and now he is insecure. These changes are likely the result of social influence, and fortunately, through the identity shift effect2, we now have a clue as to how the peer pressure process works:

Step 1: Our Personal Harmony is Disrupted by External Conflict

If we find ourselves immersed in a new social setting with values different from our own, and we are being called to act in alignment with this new set of values, contrary to callings of our heart, we will experience conflict. We feel social pressure to conform to the group if their standards are different from our own, because we experience the threat of social rejection: On some level, we know that if we fail to conform, they will reject us, so we conform to avoid the anticipated pain of rejection; we conform to avoid humiliation.

Examples: Betty moved to a new town filled with Democrats who poo-pooed Republicans. Sue loved helping people, but moved into a cut-throat corporate environment where a cold and heartless demeanor was valued and promoted.  Joe changed to a new school where the students derided him for listening to reggae and having dreadlocks, but where listening to heavy metal and having a mohawk made one popular. Harry believed in himself because his family did, but once he moved away to boarding school, the kids made fun of him for only having one arm. He started to doubt his own value.

Examples: Betty told people she was a Democrat, so she could fit in.  Although she wanted to be nice, Sue stopped acting kind and sweet, so she could be promoted at work. Joe got a mohawk and started wearing heavy metal t-shirts so he could date a popular girl he liked and be invited to parties. Harry tried to fit in, without success, and came to doubt himself and his own loveability3.

Step 3: We Undergo an Identity Shift to End Internal Conflict

Examples: Betty felt like a hypocrite, telling people she was a Democrat, when she had been a Republican.  She started to see the merits of the Democratic party over and beyond those of the Republican party, and even voted for a Democrat in the next election.  Betty changed her attitudes, to resolve her inner conflict. Sue, at first, hated acting cold and unfeeling, contrary to calling of her heart, but she began to see the merits of holding this stance and started to regard “sweetness” as wimpy.   After pretending away sweetness for so long, cold-heartedness became her signature style and default position. Sue changed her attitude about the value of sweetness to resolve her inner conflict.  Joe started to see the merits of heavy metal over reggae, and came to regard reggae as inferior.  Joe changed his attitudes, to resolve his inner conflict. By contrast, Harry tried to fit in, without success. He could not grow another arm. The classmates rejected him; he internalized their rejection into self-rejection and came to doubt himself and his own loveability. Unable to resolve his inner conflict, nor escape this external conflict, coming from his classmates and their taunts, he experienced chronic shame (chronic external and internal conflict; chronic self-rejection and social rejection) and became depressed.

Many of the examples just offered are about norms not morals. As a general rule, a norm violation doesn’t hurt anyone, whereas a moral violation is potentially hurtful to others (or perceived as such). Now, consider the case when we are being asked to follow a standard that betrays our moral standards. Say, at work, our boss asks us to lie to a customer. If we do it, against the call of our heart and conscience, our inner conflict will express itself as “guilt” (not simply “feeling stupid”), because we have betrayed our standards of “what is good, right, or true.” Correspondingly, we will undergo an identity shift (an attitude or value shift), to bring our attitudes or values in alignment with our misbehavior: We may tell ourselves:  “What I did is not that bad.”

1. “Something’s Not Right” : Signs that you are in a toxic environment and may be susceptible to a shift:

2. “Ugh! How to Get Rid of this Hideous Feeling?”: Signs that you may be about to undergo the identity shift:

In this social setting:

3. “Welcome to the Real World”: Signs that you may have already undergone the identity shift:

Fortunately, if we find that we have already undergone the identity shift, know that hope is not lost: Self-forgiveness is in order.  If we find ourselves susceptible, about to undergo, or having already undergone an identity shift, forgive ourselves–if we knew better, we would do better–and consider leaving that toxic social environment for good; instead, join one that is in alignment with our standards or values.  Consider, also, starting a meditation practice:  Meditation allows us to experience ourselves beyond our social roles, providing us with a sense a of belonging to something greater than the group, reducing our need for social acceptance to feel whole and happy.  As for depressed Harry with one arm, who is trapped in a social setting that rejects him as he is, the prescription is: 1) exit the social environment that devalues him, 2) navigate himself into a social setting that accepts him as he is–and if he can’t find one, 3) make “the non-social” or “nature” (vs. a social group) his reference group for self-understanding, done through the daily practice of meditation. Through meditation, Harry will come to know himself, as he is, apart from the standards of his social world– essentially loveable and acceptable –and feel better. Now that we understand the process and know what our options are, we are in control to choose what our next step is…

As our baahs! become a-ha’s!, by becoming aware of why people become sheeple through the 3-step identity shift effect process, we can help undo its effects:  We can reclaim our freedom by withstanding social pressure, exiting toxic environments, and coming together to create an environment that supports human thriving, allowing us to work for the benefit of humankind, towards the unleashing of human potential, and the liberation of the human spirit for all.

Dr. Treynor is a seasoned speaker and popular presenter available for speaking engagements on why people become sheeple™, peer pressure, bullying, diversity and inclusion, doing the right thing, wellness, and happiness at corporations, universities, and schools.