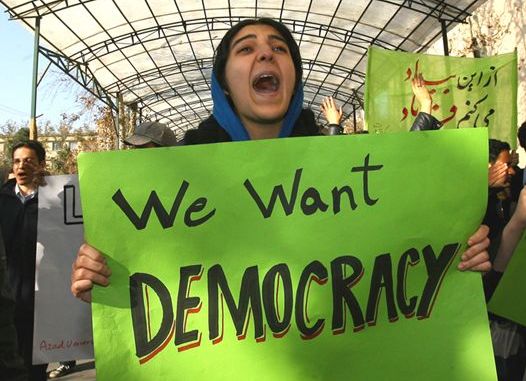 “Have I made it clear enough that people, no matter where they come from, all like to be free? That freedom is not a Western idea? There was one more thing about that myth the myth of America that I wanted to mention. The way some people talk about so called Muslim societies as if they are sort of trapped by what they call culture and religion, and there is no way that they can change. But this is a double standard, because we should remember that in the West, in the mid-nineteenth century, women did not have the right to vote, that there were many people in the U.S. and Europe who were saying that a woman’s place was in her home, and that the Bible says so. America has a history of slavery until the late 1950’s and early 1960’s the buses and restaurants were segregated and a lot of blood was shed in order for African Americans to gain equality. And the arguments that were used against women and against abolition are the same kind of arguments that are now used against change in relation to women’s rights in Muslim majority countries. Because, if Sharia laws are Muslim culture, then slavery and burning witches in Salem are the culture of this country, not Emerson and Thoreau and Martin Luther King. And the Inquisition is the culture of Europe, not St. Thomas Aquinas or Dante or Cortes. People should understand that we have our Hafez and Rumi and great poets and great philosophers, and that we also have a set of traditions that are regressive and oppressive and need to be changed (Azar Nafisi, Reading Lolita in Tehran, pg 368).”

Disclaimer: A.) I am in no way shape or form an expert on Islam, not even close. All I have to bring to the table are my personal experiences gleaned from living in Turkey for several years, conversations with very close Muslim friends, and articles I find on the internet. B.) Secondly, my purpose is more to state that the west does not have the monopoly on democracy. Democracy is not simply for Westerners.

I define democracy as an ideology. Let’s be honest no country has a real democracy. It is impossible to have every citizen voice their opinions and use that to decide policies, nothing would ever get done. Even in the US we have representatives and the electoral college. I would define democracy as an ideology that supports freedom of speech, religion, press, meeting, ideas, etc, basically the anti-thesis of a dictatorship. Democracy implies multivocality and multiculturalism. It is in ingrained in the culture; it is not simply about imitating democratic activities. Just because you hold elections does not mean you are democratic i.e. certain countries where the political parties win with 99.99% support and the ballots are tallied up in the government headquarters all hush hush. Moreover, democracy neither equates laissez faire nor anarchy. Democracy encourages citizens to dialogue and vote about the direction of their nation. With this in my mind the question is not so much who is democratic and not democratic, but who is more democratic.[1] There is no ideal democracy.

Why does this matter?

First, this matters because democracy is a universal human right. Every human has a voice that deserves to be heard. Everyone deserves “fully contested elections with full suffrage and the absence of massive fraud, combined with effective guarantees of civil liberties, including freedom of speech, assembly, and association.”[2] Every human should be allowed choices and options and not live under a dictatorship. Everyone deserves to choose how to speak, express, dress, etc. Everyone deserves to live in a society where leaders are held accountable for their actions and where there is equality among all.

Secondly, there are many who presume that to be Muslim implies anti-women sentiment, violence, terrorism, etc. The prevailing opinion of Islam is negative. I see this as a problem. I see essentialization as a problem. One’s religious preference does not determine whether one is a good person or not; the actions of one’s life determines that. I don’t care if you’re Hindu, Jewish, Muslim, Christian, Buddhist, Baha’i, etc. Those labels do not dictate your choices or determine your value. You make your life choices, not your label. And I’ve met good and bad people of all religions. This is an important matter to me because I encounter much Islamaphobia which frankly I think is ignorant discrimination and bigotry.

“For Beetham, the trouble with all such ‘negative’ hypotheses about religion and democratization is that they [treat] ‘religions as monolithic, when their core doctrines are typically subject to a variety of schools of interpretation; and as immutable, when they are notoriously revisionist in the face of changing circumstances and political current.”[3]

Ok, I’m going to have to leave this question to Muslims, because as I mentioned earlier I do not know much of Islam. All I know are the 5 pillars and the two Eids. The only thing I have to say here is that Islam is quite complex with varied manifestations and for non-Muslims to categorize all Muslims together is uneducated.  Malaysia, Turkey and Saudi Arabia are all so different.

“For one, Islam has several different sects and different schools of thought within each sect: The Shiites differ from Sunnis, which differ from Ismaelis, Sufis, Alawis, etc… Second, there are significant cultural and geographical differences between Arab and non-Arab, Gulf, non-Gulf Muslims, Middle Eastern, East Asian, or African Muslims: For example, Iranian Muslims practice and implement the teachings of Islam differently from Saudi, Bangladeshi, Iraqi, or Turkish Muslims.”[4]

Not only that, but Islam contains concepts such as shura (consultation), Ijma (consensus), and ijtihad (independent reasoning) which can be used to support democracy.[5] I still remember one of my classmates in Turkey telling me how his father often told him that, “If I had been lucky I would have been born a girl.” His father had really wanted a daughter. To say that all Muslims mistreat women is misguided. It implies that all Christians are perfect husbands, which is also not true.

Well, first off it starts with a leader who values the voice of those he leads. It also requires a constitution or some sort of agreement on the governance of the land. It requires multiple political parties and lobbyists and advocates for different groups of people including the marginalized. It requires citizens who are active and vocal about their needs. It requires the government and those governed to work together.

“Yes, political Islam and democracy can work, but not by pushing for early election. A transitional government, led by a respected leader who is not shackled by a strong ideology and who can cultivate consensus and has wide public appeal must take at least 2 years to allow secular and Islamic parties to develop their political platforms and make the public fully aware of their socio-economic policy and other urgent issues facing their nation. In the interim a constitution should be written based on freedom, democracy, and equality with separation of church and state constitutionally enshrined.”[6]

In a study by Myunghee Kim[7] she compared two variables “religious commitment” and “support for democracy.” She conducted her research on both Muslims and Christians from 20 countries and concluded that, “Neither religious values nor religious practices deeply shape support for democracy. Instead, other variables such as perceived group threats and political indicators (ideological self-placement and political involvement) wield the greater impact, particularly among industrialized societies.”[8]

This is something that I also agree with. Democracy is a culture that must be taught and valued. And factors that more accurate depict violent outbreaks and tendencies toward dictatorships are perceived group threats and political indicators. Not only that, but as I woman I have personally experienced misogyny from people of different faiths and creeds. Your religious label does not determine how you will treat those weaker than you.

My answer to the question.

So in answer to my aforementioned question I say: No, Islam and democracy are not mutually exclusive.

Admittedly, the separation of church and state is not very strong in Islam. And we see very few successful democracies in countries that are majority Muslims i.e. even in Turkey we see how Erdogan superficially supports democracy while he imprisoning journalists. [9] And after the failed coup last month there was even talk of him bringing back the death penalty. [10] There are much more examples of dictatorships than democracies in the Muslim world.

“Iraq is one of many examples of this phenomenon. For over 35 years, Saddam Hussein ruled with an iron fist and although Iraqis attempted to overthrow Saddam’s regime several times, their efforts failed miserably. With the fall of the authoritarian regime in Iraq in 2003, Iraqis embraced democracy and took pride in the change of Iraq’s political system. The majority of Iraqis are Muslim but this did not impact their resent of authoritarianism and nor their preference for democracy. This reveals that even today, many Muslims actively seek a democratic political system, but hostile dictators actively seek to silence them.”[11]

And yet, I believe that democracy is possible in Muslim nations. Not only that, but in “democratic” countries I see a decline of democracy. When certain presidential candidates allude to using more violence against protestors or calling women “10’s,” or making racist remarks, I begin to think that this is not a safe place for me as a woman and the child of immigrants. It makes agree with the Reddit comment that “It seems like people don’t actually want democracy anymore, they want a dictator who agrees with them.”[12]

Democracy must be valued and protected. And ultimately,  the question of whether Islam and democracy are mutually exclusive must be answered by Muslims.

“Can liberal democracy work in a society inspired by Islamic beliefs and principles and shaped by Islamic experience and tradition? It is of course for Muslims, primarily and perhaps exclusively, to interpret and reinterpret the pristine original message of their faith, and to decide how much to retain, and in what form, of the rich accumulated heritage of fourteen centuries of Islamic history and culture. Not all Muslims give the same answers to the question posed above, but much will depend on the answer that prevails.”[13]

What do you think? Do you have any Muslim friends? What is your experience with Islam? With democracry?